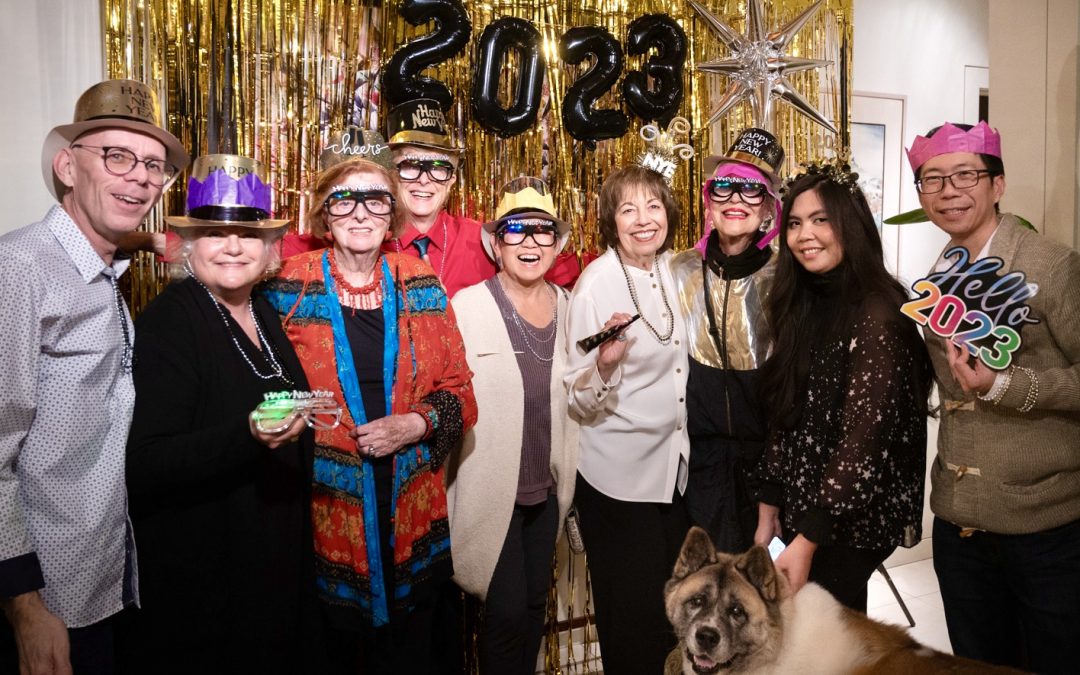 …began with Veronica decorating the house in places I didn’t even know could be decorated. No corner was safe!

The Ferrero Rocher is from dear Tania!

This was at the front door for everyone to get their hat, noise maker and bling!

Then a New Year’s Greeting!

You saw the table already but here’s a better look thanks to Curtis & Yi Lin!

Appetizers to stave off hunger! Notice the grapes? There’s a story about them I’ll tell you later.

But first dinner. I made the best chili ever and even set aside some before adding the meat for vegans. Even did black-eyed peas.

and dear Carol brought the most delicious cheese enchiladas ever!!!

Kita had her nom noms thanks to dear Carol!

All right everyone, you’re stuffed enough…time for some games! Of course there are prizes!

Tania was almost disqualified from playing because she won so much at Thanksgiving! We started off with a couple of games of Bingo won by Curtis and Nino and a Pop-up Pirate pass around….first one to pop him up got the prize…bravo Yi Lin! I have to say the most fun was a sort of charades called “Heads Up!” with the ‘word’ over one person and the partner had to guess. May I immodestly say Yi-Lin and I won. There was grumbling however, everyone saying we had easy words!

Yi Lin and Nino should have been disqualified from the chopsticks game…picking up first dried beans and then uncooked rice! After that everyone wrote their wishes for the new year on Luminary bags that were placed about in the living room because it was raining outside.

Time was running out so it was off to get Gelato!

We had set up the beanbag toss in the hallway but ran out of time for it so it’s on to the countdown!

Lots of horn tooting and eating grapes. Remember? When Charles and I were in Madrid, hunting down ‘Picasso’s cape’ his tailor told us we must eat 12 grapes at midnight! Now you know. After that…time for Karaoke!

Dear Tania instructed all of us to have something to eat in hand along with something warm to wear and go outside and come back in which we all did after holding hands and singing Auld Lang Syne! The end of the best New Year’s Eve ever and the beginning of a beautiful New Year!

May your heart be always light and your spirit joyous and may each and every day in the gift of this beautiful New Year bring you health and continual satisfactions!